As noted in the introduction to this project, the digitization of Lessons for Lovers for our project, and for future use of students and scholars, prevents the text from being lost and raises awareness surrounding an underrepresented genre: Anonymous. With the intention to preserve and represent in mind, it is also worth noting the prominence of anonymous and pseudonymous literature during the eighteenth and nineteenth centuries. Lessons for Lovers is one of a vast number of texts that have essentially been left behind in history. The reasons for this exclusion may be a result of a determination of the texts to be unimportant due to the lack of authorial context or attribution, the fact that this text in particular text indicated three women as the authors, the text discusses a seemingly "feminie" topic as it explains experiences of love through the womens' perspectives, and the list could go on.

Lessons for Lovers, containing nineteen sections in total, was published in 1829 through Hurst, Chance, and Co. in London. The title page of the text indicates that it was written by three authors, two of which are explicitly female: the unhappy young lady and the elderly gentlewoman.

The text begins with the section, "The Life and Confessions of a Hypochondriac," which spans over six books and almost 150 pages. The first book of this section holds the title, "Argument. Regrets, Love, and Indigestion." This book discusses the author's love experience beginning at the age of 21. Both an expression of the sweetness of young love and an argument about the bitterness and conflict that one experiences at this age, the author poses the argument that to express love is a rejection of happiness, later referring to this in regards to the "vicious path" of becoming a wife. The poem in this section, and throughout the six books it spans across, generates a solemn depiction of the Hypochondriac's experience with life and love. While portions of the text discuss experiences with love, the Hypochondriac touches on several points outside of the realm of romantics such as how her experience as a "fool" (Book II) led her to become a poet, Atheism and Christianity, and death.

The author additionally alludes to several authors during this section, such as Voltaire, Jean Jacques Rousseau, and Bernard Le Bovier Fontenelle. Most of the outside authors the Hypochondriac alludes to, with the exception of Charles Churchill who will be discussed later in this section, are French writers, philosophers, or poets from the late seventeenth century to mid-eighteenth century. 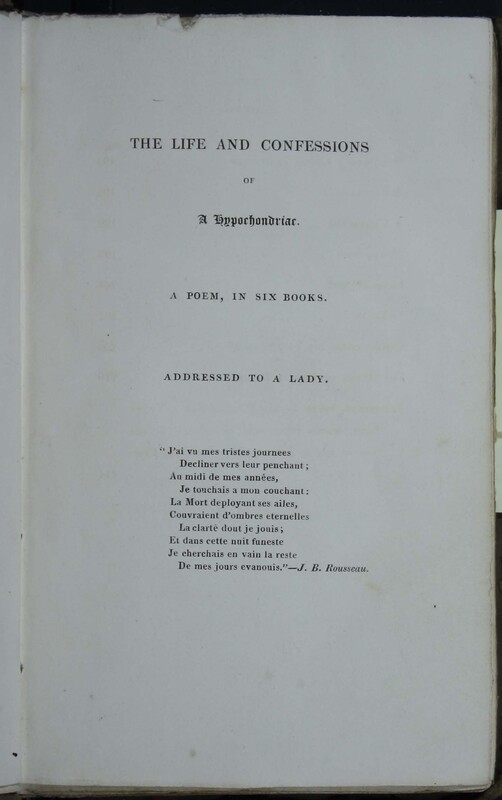 The introductory page to "The Life and Confessions of a Hypochondriac."

The arguments in the second through sixth books of "The Life and Confessions of a Hypochondriac," are as follows:

This text is filled with footnotes and attributions, some stemming from the editor and others from the allusions to works by various authors. On the final page of  "The Life and Confessions of a Hypochondriac," the author writes in the final stanza:

"Farewell! and now, my toil requite,

By proving fate has not decreed

That whatsoever I may write,

None but myself should ever read.

Farewell! and should you reprobate

The rancour I too oft may shew,

Let this in part extenuate —

For years I've lived in hopeless wo."

At first glance, it may appear that the author intends for her writing to be read by others, stating that she is going to prove fate has not deemed the opposite. However, next to this stanza in the book, the editor leaves a note suggesting a comment in the appendix. This note compares the Hypochondriac's line to a line from Charles Churchill, English poet and satirist during the mid-eighteenth century." Churchill's line, from The Rosciad, reads:

"For Fate in a strange humor decreed

That what he wrote, none but himself should read."

At the time of its publication, The Rosciad was known as a satirical piece unfavorably commenting on the prominent actors on the London stage with the exception of David Garrick. The poem was an immediate success and brought Churchill recognition and wealth that released him from his bankrupt status. The inclusion of this reference by the author opens the door for further questions from readers and scholars, of course the "why" being the foremost in our minds. Churchill's poem is known as a mock-heroic satire that focuses on the attempt to find a successor to the celebrated Roman actor and comic, Roscious. Given this, the author may have included this reference to Churchill's satire as a way of adding comedy to her lamentation. She may possibly be searching for her "successor," another lady who is following the love that she had and is on the path to heartbreak. It may also be a satirical reference from the author, possibly alluding to the fact that her experience and heartbreak is unique to the art, from her perspective, and she is "in search" of who will "replace" her.

Additionally, the slight changes between the author's written lines and Churchill's The Rosciad, create an intriguing shift in meaning. Churchill's poem reads, "For Fate in a strange humour decreed," whereas the author of Lessons for Lovers writes, "By proving fate has not decreed that whatsoever I may write, none but myself should ever read..." possibly notes that the author does not intend for fate to "decide" if her writing will be acknowledged by others. The author will prove that the writing she has completed will not be only for her eyes.

The final pages of the digitized text includes pages from the section, "Fragments, Found in the Portfolio of a Young Lady Whose Body was Discovered at the Foot of one of the Loftiest Crags in Cumberland."

"Fragments, Found in the Portfolio of a Young Lady Whose Body was Discovered at the Foot of one of the Loftiest Crags in Cumberland." 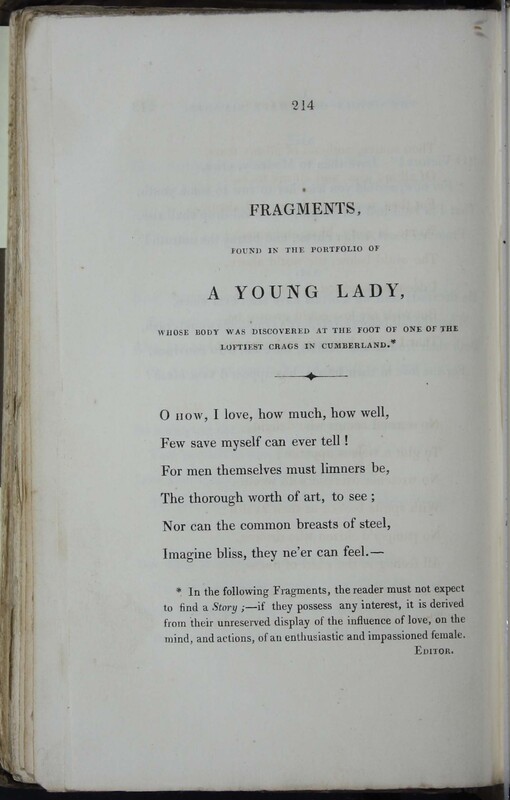 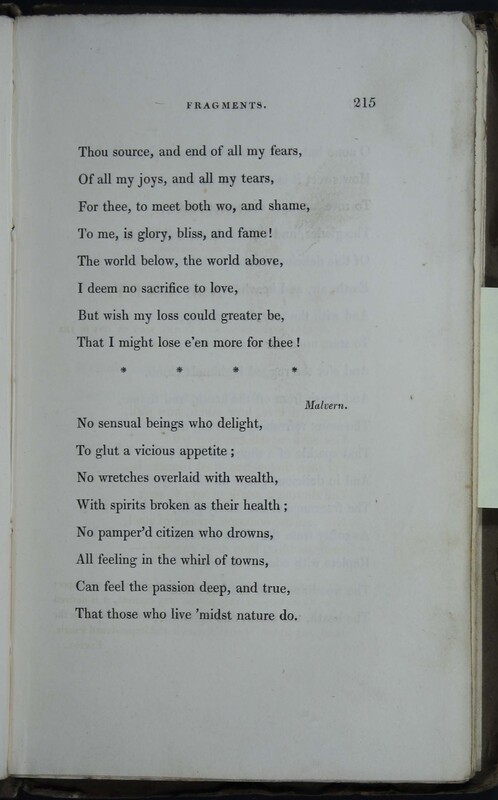 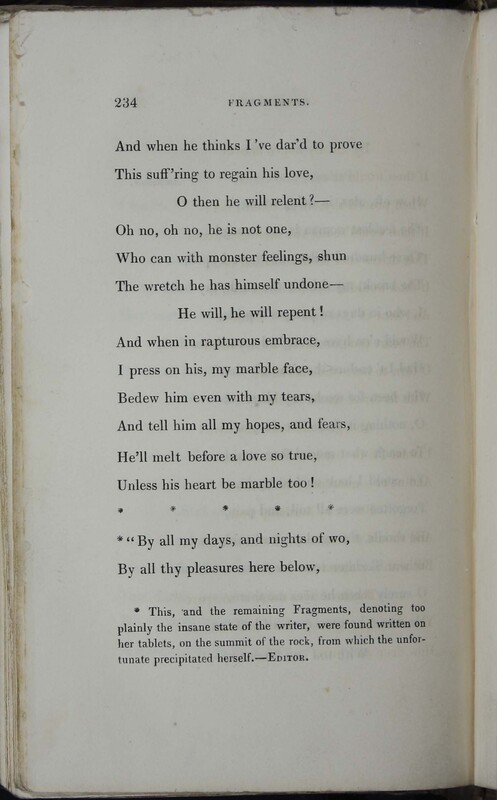 "Fragments, Found in the Portfolio of a Young Lady Whose Body was Discovered at the Foot of one of the Loftiest Crags in Cumberland." One fascinating piece of this page is the footnote written by the editor that follows the ending of the section's title. The editor writes, "In the following Fragments, the readers must not expect to find a Story; — if they possess any interest, it is derived from their unreserved display of influence of love, on the mind, and actions, of an enthusiastic and impassioned female."